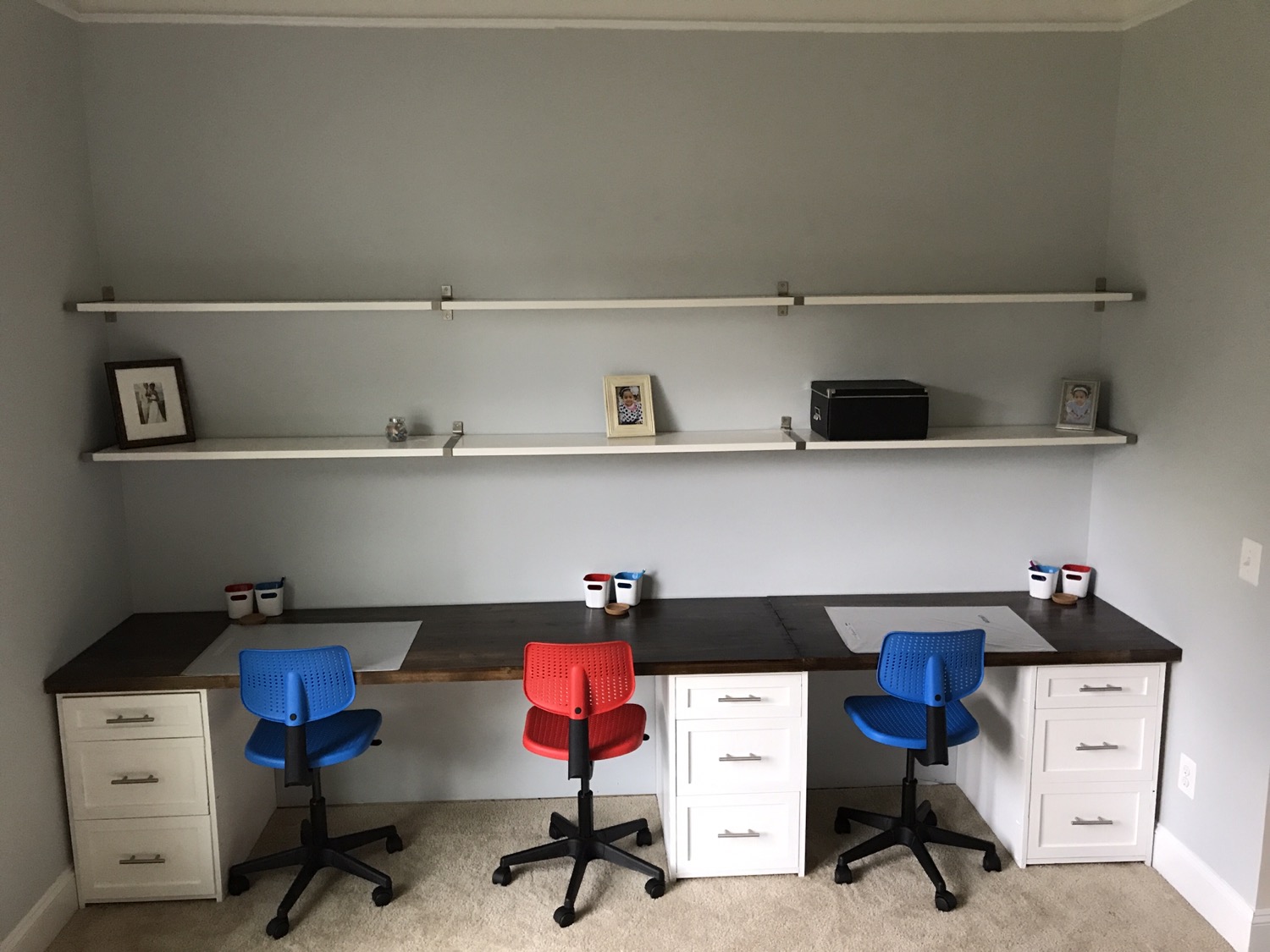 I built something. It took a long time. It was worth it though.

Have you ever made a cabinet? What about one with drawers? Have you even made a drawer? Do you even make things? My answer was “No” to three of these questions. But since I take pride in creating anything from scratch, be it a drawing on paper, a terrible riff on a guitar, or a cabinet carcass made of lauan and pine, I thought I’d give it a shot.

My wife wanted built-in desk space for our three kids. Space where they could write, draw, paint, or just hang out whether she was in her office or not. The office in our house is fairly large but without this designated area items built up on the floor overtaking the room.

The wall where the desk would go measured just under 139″, so it was a significant amount of space to fill. But we mapped out the area for 3 three drawer cabinets. We knew that since one of our kids is a lefty we would need to account for that during cabinet placement.

We did some Google searches and found a few specs for cabinet carcasses, deciding to adapt the ones from ana-white.com. They are a good framework and can be manipulated as needed. We decided on three drawers for each cabinet, deciding later to have them lie flush with the front of the cabinet instead of overlaying the face (we like to make things fun).

The drawer faces are more of the lauan board, but to get that nice shaker look you attach some these pine boards with wood adhesive and brad nails. Finally, we used these drawer pulls. You can get them in a pack of 10.

The drawers and carcasses were all painted with cabinet semi-gloss paint. Get this before using a regular wall paint. The cost will lead you that way, but this cabinet paint has some oil in it and will keep away those knicks and rubs from showing up on the paint. Also we used 120 and 220 sanding sponges to smooth everything out.

Proper placement of the drawer glides proved to be a royal pain, despite correct measurements. After carcass one, we switched glides from this to this. The new ones helped make leveling between the two sides a whole heck of a lot easier.

Now onto the table top. It’s comprised of two pieces of birch butcher block, a four footer and a cut eight footer. This just worked out best for how we had the drawers situated. These were first treated with a pre-stain wood conditioner before diving into two 10 minute coats of a dark walnut stain. To finish it off we used butcher block oil to seal. We only did one coat since we are not anticipating cutting raw meat on this butcher block. Which if you didn’t know, butcher block is pretty heavy so make sure you have appropriate help to move it around. This was the case for when I had to cut the eight foot piece. That is an impossible task for just one person. And have a sharp blade.

Finishing touches came mostly from IKEA, including the shelving. We trimmed the outer shelves to fit the space and line up the shelf brackets.

Finally, here are some pictures.We’re really glad to have the space completed. There are more projects to come, including replicating this with an L desk.